scene is Heike Michiyo's sixth single, and the first single where Heike wrote the lyrics herself. It was released on July 28, 1999, on the Warner Music Japan record label. The single reached #79 on the Oricon chart, and sold a total of 2,760 copies. 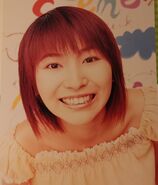 Add a photo to this gallery

Retrieved from "https://helloproject.fandom.com/wiki/Scene?oldid=473016"
Community content is available under CC-BY-SA unless otherwise noted.