Propose (プロポーズ) is Heike Michiyo's tenth single, and her first on the zetima label. It was released on November 7, 2001. 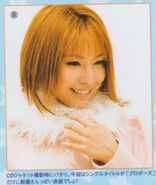 From the shooting of the CD cover


Cite error: <ref> tags exist, but no <references/> tag was found
Retrieved from "https://helloproject.fandom.com/wiki/Propose?oldid=483435"
Community content is available under CC-BY-SA unless otherwise noted.