On March 22, 1998, Tsunku announced on an episode of ASAYAN in front of Nakazawa Yuko, Ishiguro Aya, Iida Kaori, Abe Natsumi, and Fukuda Asuka that he was looking for more members for Morning Musume. While they are crying, application requirements are aired on screen.

On the following ASAYAN episodes throughout March and April, we are shown footage of all the applications that have been sent in.

On April 26, footage is shown of applicants who are singing a capella in front of Morning Musume's manager Wada Kaoru. We also get to see applicants being interviewed face to face by staff members, and Tsunku watching VTRs. He chooses 16 applicants to move on.

The final 16 are invited into the recording studio with Wada and Tsunku for interviews. Afterwards, they both go through the applications.

On May 3, three winners are announced; Ichii Sayaka, Yaguchi Mari, and Yasuda Kei. 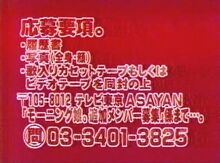 ?
To send in two pictures; full figure and face shot.
To send in a cassette tape with a song and a video tape (VTR).

Retrieved from "https://helloproject.fandom.com/wiki/Morning_Musume_Tsuika_Audition?oldid=471911"
Community content is available under CC-BY-SA unless otherwise noted.