In 2004, it was re-released as part of Morning Musume Early Single Box, a limited edition box set containing their first eight singles reissued on 12cm CDs. In 2005, the singles were released individually, and first press editions came with a photo card.

Tsunku commented on the single:

I almost wanted to sing this song for myself. It is such uplifting, happy dance music. I’ve created many dance songs that naturally make people want to dance, but "LOVE Machine" is definitely the best choice. It is danceable. Actually, you cannot help dancing when you hear this song.

As a producer, it may not be so appropriate to tell you this, but I thought Morning Musume was very amazing. "LOVE Machine" is a great song as a group, and that means this song can be beautifully completed thanks to the 8 members. When I watch them sing, I feel so happy and excited that I cannot help dancing. Morning Musume has been getting enough experiences in front of a large audience, and I genuinely envy them. I can close my eyes and imagine them having an awesome time. I really think they’ve become something great and amazing. They have been constantly evolving since its debut. By the 7 single, they’ve grown up to be really cool artists. I hope they will continue to grow and evolve, become cooler and sexier. 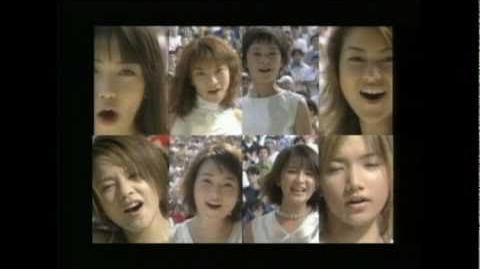 Retrieved from "https://helloproject.fandom.com/wiki/LOVE_Machine?oldid=463531"
Community content is available under CC-BY-SA unless otherwise noted.