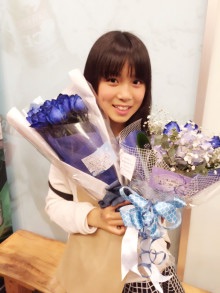 Kodama Sakiko (児玉咲子) is a member of Hello Pro Kenshuusei under Hello! Project.

Prior to joining Hello Pro Kenshuusei, she was a member of the idol groups Deluxe Colors and Farewell MY L.u.v.

In January 2016, Kodama joined Hello Pro Kenshuusei alongside Noguchi Kurumi, Ono Kotomi, Yonemura Kirara and Kiyono Momohime. She will be introduced and perform in the February/March recital.[1]

As of April 2015, Kodama is currently in her last year of elementary school.

Retrieved from "https://helloproject.fandom.com/wiki/Kodama_Sakiko?oldid=308221"
Community content is available under CC-BY-SA unless otherwise noted.