In June 2004, Kawashima joined Hello Pro Egg after successfully passing the Hello Pro Egg Audition 2004 along with 31 other girls.

On September 14, 2005, it was announced that Kawashima graduated from Hello Pro Egg and Gatas Brilhantes H.P..[2] Her reason for graduating was because she wanted to concentrate on her studies, and because she lived in a place that made it difficult for her to attend activities. 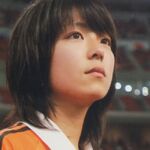