Kashou Egg (仮称エッグ; Temporary Egg) was a planned collection of young girls training in the hopes of being promoted to Hello Pro Kenshuusei.

Members would receive dance and vocal lessons for half a year, and be promoted to Hello Pro Kenshuusei if they impress Tsunku with their improvements. Auditions for this group were announced on August 30, 2013 through De☆view magazine, and as of May 31, 2016 no further updates have been given. 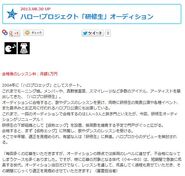