Juice=Juice (pronounced as ジュースジュース) is a Japanese pop group under Hello! Project. They were originally formed on February 3, 2013 by five members from Hello Pro Kenshuusei and a member from the SATOYAMA movement unit GREEN FIELDS.[1] 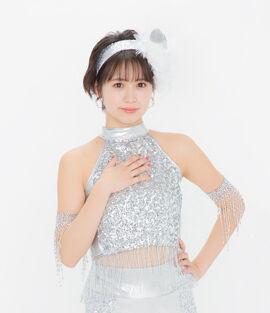 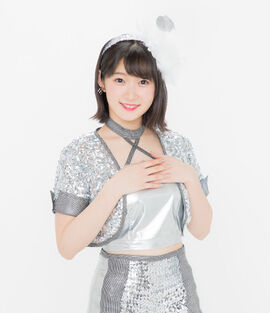 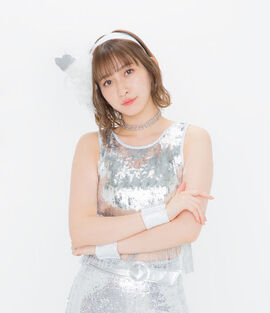 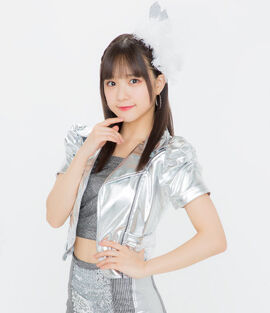 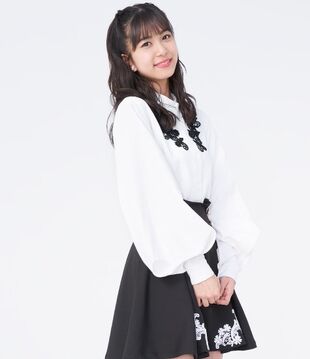 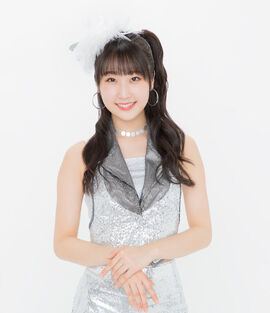 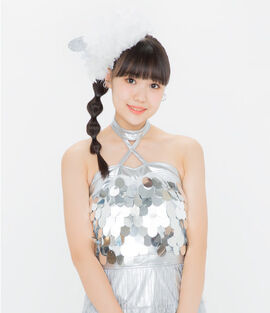 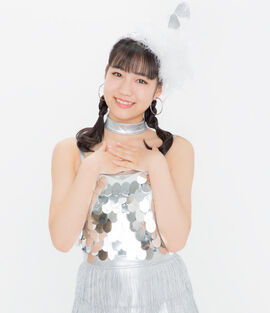 On February 3, during the Hello! Project Tanjou 15 Shuunen Kinen Live 2013 Fuyu ~Bravo!~ show in Fukuoka, Juice=Juice was announced as a new unit, consisting of Miyazaki Yuka, Kanazawa Tomoko, Takagi Sayuki, Otsuka Aina, Miyamoto Karin and Uemura Akari, with each member representing a fruit.[1] The unit was unnamed until February 25, when the name and member colors were revealed.[2][3]

On March 2, Juice=Juice made their debut as a group at the Hello! Project Haru no Dai Kansha Hinamatsuri Festival 2013, where they also announced and performed their first indies single "Watashi ga Iu Mae ni Dakishimenakya ne".[3] Their debut indies single was pre-released on March 31 in respect to Hello Pro Kenshuusei Happyoukai 2013 ~3gatsu no Nama Tamago Show!~. The single had a general release on April 3, 2013 and reached #25 in the weekly Oricon charts, selling 2,275 in its debut week.[4]

On July 5, it was announced that Otsuka Aina had withdrawn from both Hello Pro Kenshuusei and Juice=Juice due to contractual issues with her family.[14] Juice=Juice resumed activities as a 5 member group.

Juice=Juice was the opening act for ℃-ute Budokan Concert 2013 "Queen of J-POP ~Tadori Tsuita Onna Senshi~" on September 9 and 10.[21] Juice=Juice also had handshake events prior to the Budokan concert showings.[22]

On October 3, Juice=Juice began broadcasting their first regular radio show titled We are Juice=Juice on bayFM.[24]

On November 22, it was announced that Juice=Juice won a New Artist Award and were nominated for the Best New Artist Award at the 55th Japan Record Awards.[26] The event took place on December 30, but they did not win.

From November 19 to 24, Juice=Juice starred in their first musical Koisuru Hello Kitty.

On May 2 during the opening concert of the Juice=Juice First Live Tour 2015 ~Special Juice~ at Nakano Sun Plaza, Juice=Juice announced their first studio album First Squeeze! would be released on July 15. They also announced their goal to perform at Nippon Budokan in 2016 and their plan to reach it by performing 220 shows across Japan.[30]

On June 21, Juice=Juice began their goal to perform 220 shows by fall 2016 with the Juice=Juice LIVE MISSION 220 ~Code1→Begin to Run~ concert tour.

On October 8, it was announced Juice=Juice would be starring in a 2016 Fuji TV drama titled Budokan about a fictional 5-member idol unit called NEXT YOU. During the production of the show, which began in November, many of Juice=Juice's lives, events, and appearances were as NEXT YOU.[32]

On February 3, Juice=Juice released their seventh single, and their first as NEXT YOU, titled "Next is you! / Karada Dake ga Otona ni Nattan ja nai".

On May 4, it was announced via video, during the Juice=Juice LIVE MISSION 220 ~Code3 Special→Growing Up!~ at Nakano Sun Plaza and on Hello! Project Station, that Juice=Juice would hold their first concert at Nippon Budokan on November 7 after completing 220 shows as part of the LIVE MISSION 220 project.[35][36]

On May 19, Juice=Juice released the digital song "Goal ~Ashita wa Acchi da yo~".

On June 16, they released another digital song "Jouro".

On June 26, it was announced through a special episode of Hello! Project Station that Dambara Ruru and Yanagawa Nanami, as a concurrent member from Country Girls, have joined Juice=Juice as new members and would begin activities in the group in the Hello! Project 2017 SUMMER concert tour[37][38][39] and Juice=Juice LIVE AROUND 2017 ~Seven Horizon~.[40]

On June 13, it was revealed that Inaba Manaka had joined Juice=Juice as a new member and would begin activities with the group in the Hello! Project 20th Anniversary!! Hello! Project 2018 SUMMER concert tour.[41][42]

On November 2, Yanagawa Nanami announced that she would be graduating from the group and Hello! Project in March 2019.[43]

On December 21, leader Miyazaki Yuka announced that she had decided to graduate from Juice=Juice and Hello! Project at the end of their 2019 spring tour.[44][45]

On March 22, it was announced that Juice=Juice was appointed as an official supporter for the Aidorisai 2019 ~Idol Matsuri~ contest along with ANGERME, Up Up Girls (Kari), The World Standard, and Chuning Candy.[48]

On June 12, it was announced in episode #293 of Hello! Project Station that Kanazawa Tomoko was chosen as the new leader and Takagi Sayuki as the new sub-leader following Miyazaki Yuka's graduation on June 17.[49][50] Miyazaki also announced that new member(s) from Hello Pro Kenshuusei would be joining the group and they would be revealed on the group's official YouTube channel on June 14 at 9:00 PM JST.[51]

On June 14, it was revealed that Hello Pro Kenshuusei Hokkaido member Kudo Yume and Hello Pro Kenshuusei member Matsunaga Riai have joined Juice=Juice as new members. They had their first on-stage introduction as group members at Miyazaki Yuka's graduation concert,[52][53] and they were also introduced on stage during the Hello! Project 2019 SUMMER concert tour from July 13.[54]

On August 4, Juice=Juice performed at rockin'on presents ROCK IN JAPAN FESTIVAL 2019 on the BUZZ STAGE.[56][57]

From November 3, Juice=Juice appeared as themselves in the NHK BS Premium drama Yuganda Hamon, which has a central character that is a fan of the group.[58]

On December 29, they performed at rockin'on presents COUNTDOWN JAPAN 19/20 held at Makuhari Messe.[59]

On February 10, it was announced that Miyamoto Karin will graduate from Juice=Juice and Hello! Project at the end of Juice=Juice CONCERT TOUR 2020 Haru in order start activities as a soloist.[60][61] It was also announced that the group will release a new single on April 1 titled "Pop Music / Suki tte Itte yo", which will include a cover of KAN's most recent single "Pop Music".[62]

On April 1, it was announced through their mini-live livestream promoting "Pop Music / Suki tte Itte yo" that former Kobushi Factory member Inoue Rei would be joining Juice=Juice as a new member.[63] She will officially begin activities after Miyamoto Karin's graduation.

Juice=Juice performed outside of Japan for the first time on October 3 and 4, 2015 in Taipei and Hong Kong as part of the LIVE MISSION 220 project.

On April 12, 2017, Juice=Juice announced they would hold a world tour in the fall with concerts in the United Kingdom, France, Germany, Mexico, Thailand, and Malaysia.[65][66] The tour's title was later announced as Juice=Juice LIVE AROUND 2017 ~World Tour~, and it would start on September 8 in Mexico City. Concerts in Indonesia and Taiwan were also added to the tour.[67] Instead of full concerts, in Malaysia, they performed in the JAPAN x MALAYSIA Friendship Concert 2017,[68] and in Indonesia, they performed a free mini concert at the Taste of the World festival.[69]

After they completed their first seven shows of the Juice=Juice LIVE AROUND 2017 ~World Tour~ in October 2017, Juice=Juice announced they would also tour South America that December.[71] They performed at the IDOL♡LOVE event in Peru, then held a concert in Chile. Afterwards, the groups performed in two Brazilian cities, São Paulo and Fortaleza, of the which the latter took place at the Sana Fest anime convention.[72]

In early June 2020, Juice=Juice will hold an overseas travel tour in Vladivostok, Russia as part of the Japan-Russia Regional Cultural Exchange 2020-2021.[77]

Juice=Juice was named by Tsunku. According to him Juice=Juice's concept should be cool and sexy. He named it with the hope that it would be a unit that was fresh and full of personality forever. Still, the fact that it is not bright and cheerful childish, It is a good stretch while mature, to COOL, and can produce a sense of youth sizzle.

Retrieved from "https://helloproject.fandom.com/wiki/Juice%3DJuice?oldid=477431"
Community content is available under CC-BY-SA unless otherwise noted.