Tsunku
Jounetsu Yuki Miraisen (情熱行き 未来船; The Passionate Ship To The Future) is Coconuts Musume's fifth single. It was first announced to be released on January 1, 2001, then postponed and set for a release on February 7, 2001. It was then later postponed as "undecided" before eventually being released on August 22, 2001.[1] The first press of the single came with a sticker sheet.

This is Coconuts Musume's final single despite the group being active for six more years. 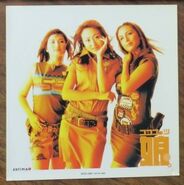 First Press Sticker
Add a photo to this gallery

Retrieved from "https://helloproject.fandom.com/wiki/Jounetsu_Yuki_Miraisen?oldid=493610"
Community content is available under CC-BY-SA unless otherwise noted.