The wiki about Hello! Project, Up-Front, and TNX idols that anyone can edit.

More details to be announced.

A special project, entitled "Nippon! Call Project", was introduced to the media on that same day. The project features an app (available in the Apple and Android App Store), in which people can show support to Team Japan. It requires entering one's name and a recording of them yelling "Nippon!", which both will be received by the Japanese Sport Teams.
In the past, the group released a cheer song titled "THE Manpower!!!", for the baseball team, the Tohoku Rakuten Eagles. The previous time the girls released an Olympic-related song was in 2000, with "I WISH" being TBS's theme song for the 2000 Summer Olympic Games. This is the first time the group are singing an official theme song for the Japanese Olympic Team.
October 25, 2013 - Fukumura Mizuki's grandfather has passed away
Fukumura blogged on October 25, 2013 reporting that her grandfather had passed away. Her grandfather was well known among her fans because she often mentioned him in lives and mentioned he owned trains. Her grandfather not only loved trains, but also loved dogs, cats, rabbits, motorcycles and cameras.
12 Days earlier Tamura Meimi's grandmother passed away.

October 25, 2013 - Umeda Erika to make a come-back in the music industry
Some good news for former C-ute member Umeda Erika fans! On October 25, 2013 Umeda announced through her blog and a YouTube video that she would be returning to the music industry as a soloist, she picked October 25 to announce her come-back because it marked the 4th year since her graduation from C-ute. She has opened her own website and will perform her first solo live on December 22, 2013 titled "~Starting Over~".

October 7, 2013 - Former Morning Musume member Kago Ai will form a girl group!
On October 7th, former 4th generation Morning Musume member Kago Ai, who was fired because of a series of scandals, announced on her diamond-blog, that she was going to form a new 4-member girlgroup within her new agency she recently joined.
Girls between 15 and 21 that live in the area of Tokyo and are not under a different production can audition. Two of the girls will be picked by Kago herself and she´s looking for girls with special abilities.

Morning Musumes new single Wagamama Ki no Mama Ai no Joke/Ai no Gundan, which is the first single without Tanaka Reina since AS FOR ONE DAY, is a big success.
It successfully hit #1 at the Oricon Daily-Charts with 96,075 copies sold as well as #1 at the Oricon Weekly-Charts with 144,061 copies.
This single has beat the first week sales for all previous singles since Do it! Now and currently has the 11th best selling first week for a Morning Musume single.
"Wagamama Ki no Mama Ai no Joke" MV passed already 2,000,000 views while "Ai no Gundan" MV passed 1,000,000 views.
Congratulations! 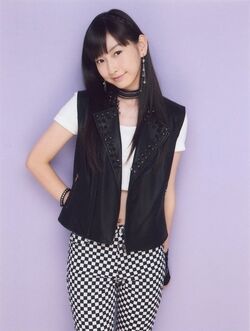 Retrieved from "https://helloproject.fandom.com/wiki/Hello!_Project_Wiki?oldid=153898"
Community content is available under CC-BY-SA unless otherwise noted.