None
Hello! Project Shin Member Audition (ハロー！プロジェクト新メンバーオーディション) was the audition for new members to join Hello! Project as part of their 20th anniversary celebrations in 2018. It was announced on July 15, 2017 at Hello! Project 2017 SUMMER ~HELLO! MEETING~.[1]

On November 13, 2017, a AbemaTV program following the audition, titled Shoujotachi no Ketsudan ~Micchaku!! Hello! Project 20 Shuunen Audition~ (少女たちの決断〜密着!!ハロー!プロジェクト20周年オーディション〜; Girls' Decisions ~Close Coverage!! Hello! Project 20th Anniversary Audition~), began.[2] To make the audition memorable, the program showed full close coverage of the audition for the first time since 2011. In addition, various past and current Hello! Project members watched and commented on the audition process from a studio. Unreleased footage and stories from the audition were also uploaded onto AbemaVideo.[3][4] The show ended on December 18, 2017 with a total of 10 episodes.[5]

After the results were announced in episode six,[6] the last four episodes focused on the finalists who did not pass, but then decided to join Hello Pro Kenshuusei, and them practicing for the Hello! Project Kenshuusei Happyoukai 2017 12gatsu ~Conti→New!~.

Screening of the primary documents was completed on August 25, 2017, and it was announced that successful applicants would be sent information on the second round screening through the mail.[7]

89 girls from all over the country were selected to take part in the second round screenings held in both Tokyo and Osaka in September 2017.[7][8]

Recording director Hashimoto Shin was a member of the judging panel in Tokyo. He and three other judges reviewed each girl's profile and interviewed them.[8]

In this round the girls had to:[8]

Identified participants in this round are:

The final round took place in October 2017. The finalists had to learn to perform "Jealousy Jealousy" as a group for their final evaluation all in one day. Mitsubachi Maki was in charge of dance lessons,[9] and marron was in charge of singing lessons and divided parts of the song to the girls.[10]

8 girls were chosen to participate. They include:[8]

Nishiguchi Takeshi revealed there were no winners. He invited all of the girls to join Hello Pro Kenshuusei to gain more experience, but told them to discuss their decision with their parents first.[12]

All of the finalists except for Kodama Mai accepted their invitations, and they were introduced and did a dance performance of "Jealousy Jealousy" together in the Hello! Project Kenshuusei Happyoukai 2017 12gatsu ~Conti→New!~ on December 10, 2017 at Zepp Tokyo.[12][13] 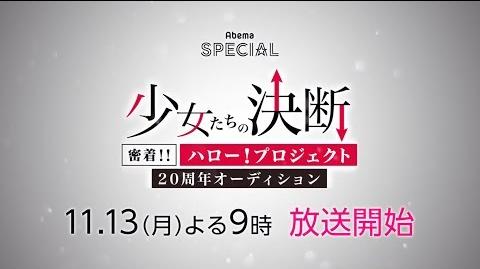 Retrieved from "https://helloproject.fandom.com/wiki/Hello!_Project_Shin_Member_Audition?oldid=536569"
Community content is available under CC-BY-SA unless otherwise noted.