Start a Wiki
The Hello! Project Korea Auditions (対東京少女; Meet Tokyo Girl, 대 동경소녀; DaeDong Kyung Youths) was a 2009 audition to find Korean Hello! Project members and expand Hello! Project into the South Korean entertainment industry, as part of an Asian-expansion initiative that saw the additions of Chinese members into Morning Musume in 2007, and the creation of Hello! Project Taiwan (Ice Creamusume and Dà Xiǎo Jiě) in 2008.

The audition was open to applicants from March 2009 to April 2009, with a special show on Mnet following the audition process starting in May 2009.

There were 2,500 applicants in total, and the sole winner of the audition was announced on June 21, 2009 as Jang Da Yeon.

The first broadcast of the official audition show aired in late May 2009 by M.Net digital channel. The official theme song of the show was Dream Girl by After School, a LOVE Machine cover. 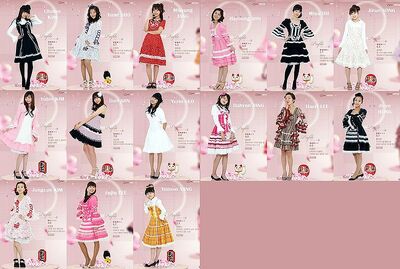 The special Mnet show documenting the audition ran from May 22, 2009 to July 10, 2009 with a total of 8 episodes. The show's description indicated that the audition was seeking "the second Morning Musume" or "the second BoA".

Broadcasted on May 22, 2009. The three judges are gathered, E-Tribe, Jung Sungwook, Soulflower. The finalists perform in front of them and the judges gave their feedback. They were severely disappointed and said that none of the girls had what it takes to be a singer in Japan. Then the girls get split in two teams (A and B). Then the scene shifts, and it shows that both teams have to state their bads about each other. The girls aren't serious enough and the two MCs (Chansung and Junho) get mad at them.

Broadcasted on May 29, 2009. Team A and B get into a recording studio and get feedback from Soulflower. According to the judges, Team A is less skilled than Team B. Both teams stay in the recording studio. ℃-ute's Umeda Erika and Yajima Maimi pop in to observe and watch Team B. Then there's a performance day. Each team can only perform once. Tsunku says through a VTR that the keyword when performing is "smiling face" in Japan. The girls perform ℃-ute's Sakura Chirari and the judges gave their feedback. They said that although Team B's level has gone up (regarding singing and dancing), it was Team A that surprised them (was really energetic, worked well as a team). Then the teams are switched up: New Team A: So YuMi (leader), Oh MiNa, Jang Mikyung, Kim ChoHye. New Team B: Yang YunSoo (leader), Lee SuJin, Seo YeRin, Jang DaHyun, the two new leaders were chosen because they stood out the most to the judges.

On June 21, 2009 the finalists, Berryz Koubou, Tsunku and 2PM members Chansung and Junho gathered in the auditorium of Seoul's Yonsei University, where Berryz Koubou MINI LIVE in Korea took place, the finalists delivered a performance of "3, 2, 1 BREAKIN' OUT!" and Jang Da Yeon (14) was announced as the winner of the audition. According to Tsunku, Jang was chosen because she had the most star quality among the finalists.

She became inactive following the S/mileage Shin Member Boshuu! audition in the summer of 2011.

Retrieved from "https://helloproject.fandom.com/wiki/Hello!_Project_Korea_Auditions?oldid=454851"
Community content is available under CC-BY-SA unless otherwise noted.