@mirei301ove
Hashida Mirei (橋田三令), better known as 三令-Mirei- is a Japanese pop singer and vocal instructor. She is a former member of the Hello! Project trainee program Hello Pro Egg, having joined in June 2004 and left on June 10, 2007.[1]

Since leaving Hello! Project, she has been active as a soloist and background vocalist for artists such as Girls' Generation, Itano Tomomi, Goriki Ayame, Lily.μ, and Hashimoto Kanna. She also works as a "vocal guide" for Korean pop artists such as SE7EN, Apink, Momoland and Red Velvet on their Japanese tracks.[2][3][4]

Hashida Mirei was born on April 28, 1992 in Fukuoka, Japan. She was raised in Abiko, Chiba and currently resides in the prefecture.

In 2004, Hashida took part in the Hello Pro Egg Audition 2004 and successfully passed. She was announced as a founding member of Hello Pro Egg in June along with 31 other girls.

In 2006, Hashida was selected to be featured in the single "Sora ga Aru" alongside Kitahara Sayaka, Stukas Robin Shoko and Fukuda Kanon, for the 2006 Niseen Hikosen Project campaign. The single was released on April 23, 2006.

From October 5-9, she participated in the stage play "Kenroh -KENROH-".[5]

On June 10, Hashida left Hello Pro Egg.[1] The sudden departure came after a blog post she published in a secret blog account, where she stated that she was constantly stalked by otaku, calling them "gross."[6]

In August, Hashida became one of the vocalists featured in the compilation album "Girls Bon Odori" and returned to activities in the entertainment industry. Since then, she has become active as a studio vocalist.

In May, she announced her first solo single, "My Song", which was released on June 26 under KING RECORDS.

※This section is under construction. 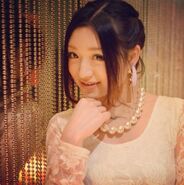