Gomennasai (ゴメンナサイ; I'm Sorry), released in English-speaking territories as Ring of Curse, is a 2011 horror film starring the members of Buono!. The movie is based on a cell phone novel of the same name that was released on a mobile site, Magic Land, in May 2007.[1] It was released in theaters in Japan on October 29, 2011, and on DVD on February 8, 2012. The Buono! song DEEP MIND was used as the ending theme of the movie. The film was directed by Asato Mari.

The movie was released in the United States as Ring of Curse on June 25, 2013.

Hidaka Yuka is an average high school student who is part of the literature club. There is a strange student in her class, a girl named Kurohane Hinako, whom everyone seems to view as an outcast. The class president, Sonada Shiori, becomes jealous of Kurohane's high grades and test scores despite the fact that she regularly doesn't attend study hall or gym class. Sonada is consistently ranked second herself due to Kurohane's scores. Sonada turns the class against Kurohane, pointing out these things about Kurohane and enlisting her friends to help her torment the young outcast. Hidaka does not actively engage in the bullying of her classmate, yet neither does she step in to help. Kurohane is soon the subject of multiple bullying tactics, including her bag being dumped on the floor and being pushed down the stairs, all of which she seems to take without complaint.

Not long after, there is a vote on what to do for the school cultural festival. Sonada, in another attempt to bully and ridicule Kurohane, tells her that she will be the one to write the script for their class play. She hides her intent by mentioning how Kurohane once won a literature contest, something Hidaka harbored slight jealousy of her own over. Hidaka views Kurohane's job as a gift and resents her more for it.

Soon, however, Hidaka and her class are subject to a string of deaths all seemingly connected to Kurohane and her script. Hidaka is the only one to connect the two and she is forced to intervene. With death all around her and no one left to help, she is left to discover the secret behind Kurohane's notebook, and her dark past, alone. 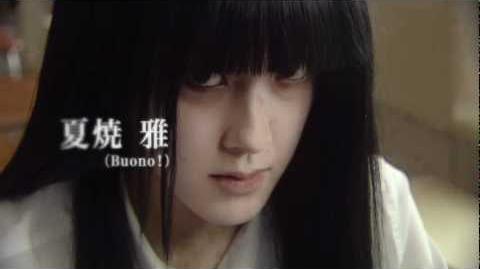 映画『ゴメンナサイ』予告篇
Add a photo to this gallery

Retrieved from "https://helloproject.fandom.com/wiki/Gomennasai?oldid=448242"
Community content is available under CC-BY-SA unless otherwise noted.