NEW: The Hello! Project Wiki is holding the Admin'22 ~TEN CARAT~ Audition from December 1st to December 22nd to look for new admins! Visit the discussion page to see how to apply!

Single by Goto Maki
from the album Makking GOLD 1

Tsunku
Ai no Bakayarou (愛のバカやろう; Love's Fool) is Goto Maki's first single. It was released on March 28, 2001 on the Zetima label. It was released while Goto was still a member of the group Morning Musume.

This is Goto's highest selling single. The single reached #1 on the Oricon charts and charted for nine weeks, selling 434,790 copies. It also reached #37 on the yearly Oricon charts for 2001. 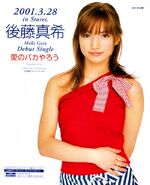